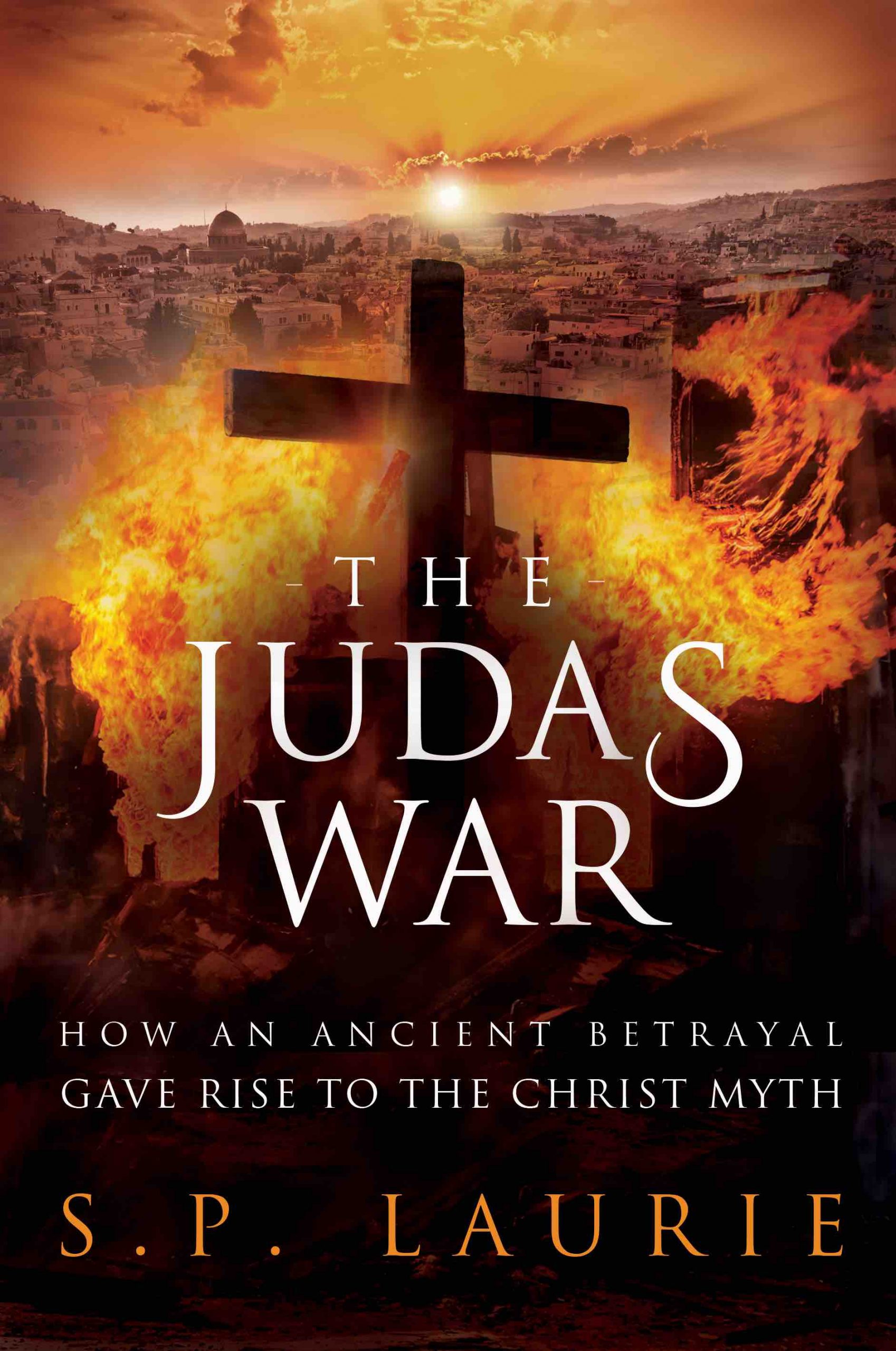 I am delighted to introduce my new book, “The Judas War: How an ancient betrayal gave rise to the Christ myth”. The Rock and the Tower dealt mainly with the resurrection and the spiritual Christianity introduced by the shaman Mary.  The new book is concerned with what came before Mary. It covers the crucifixion and the religious worldview which Mary inherited—the apocalyptic foundations of Christianity.

Although this is the second shaman paradigm book, it is not being marketed as second in the series because it works fine as a stand-alone volume. It can be read on its own, or before or after The Rock and the Tower. It is almost like a prequel to the earlier book, so it may be a good place to start for new readers.

So why is it called the Judas War? And why does it trace the Christ myth back to what many people will see as an absurdly early date at around 700 BC? The book does what we should always do and follows the evidence. It starts with the statement by Paul that the archons crucified the Christ, and with the Thomas parable of the tenants. From there it uncovers a world ruled by angels. It traces this myth further back to the origins of the Israelites as revealed by archaeology: they did not enter Canaan through an exodus from Egypt as the Bible would have us believe. They had been in Canaan all along. From Canaanite sources and clues in the Hebrew Bible, we can uncover the real religion of the Israelites before the exile. The book shows how Christianity reflects this pre-exilic worldview as the Israelites were struggling towards monotheism. The bifurcation between Christianity and Judaism did not emerge in the later first century AD. It goes back to before the exile.

At this time, the Israelites were divided into two kingdoms. To the north was the larger and more powerful kingdom of Israel, and to the south, the smaller nation of Judah centred on its capital of Jerusalem. The twin kingdoms existed between two superpowers; to the south, Egypt, and to the north, the ever-expanding Neo-Assyrian Empire. It is well known that Israel fell to Assyria, culminating in the capture of Samaria by the Assyrians in 722 BC. It is less well known that Judah was an ally of Assyria throughout this conflict. Indeed, Judah triggered the Assyrian invasion. The Judean king Ahaz paid a large amount of treasure, taken partly from the temple, to persuade the Assyrian king Tiglath-pileser to invade Israel and Syria. I have called this conflict the “Judas War”.

As a result of the Judas War, Israel was utterly destroyed—it simply ceased to exist. The Assyrian Empire absorbed the territory of Israel, and the Israelites were exiled to other parts of the empire. Other ethnic groups were moved in to replace them. Doubtless, some Israelites remained, but recent studies have shown that the repopulation of Israel was perfectly real. To escape the Assyrians, many Israelites fled as refugees to the south, to the kingdom of Judah. The archaeologist Israel Finkelstein has shown how the population of Judah underwent an extraordinary expansion at this time. These Israelites would have nursed a bitter hatred of the Judean establishment who had betrayed their nation to destruction. This bitterness was passed down from generation to generation. And it was from the descendants of these Israelites that Christianity was to emerge.

So how does this relate to the crucifixion? The ancients believed that “as on earth, so in heaven”. Earthly events had heavenly causes. The crucifixion myth only fully emerged after Judah had shared the fate of Israel at the hand of the Babylonians. The Israelites and Judeans were the chosen people of Yahweh. So how could such a terrible thing happen to them? The Judeans developed the Hebrew Bible (the Old Testament) to try and explain the disaster. The writing of the scriptures began before the Judean exile although it only reached something like its current form in the post-exilic period. The Bible was an attempt to shift blame away from the Judeans and onto the Israelites. Because the Israelites had worshipped other gods at the “high places”, Yahweh had justly punished them, destroying their corrupt nation. After the exile of Judah, the explanation had to be developed further: Judah had been granted more time, but had also succumbed to evil Israelite ways and so had shared Israel’s ruin.

The Israelite dissidents did not blame Israel—they blamed Judah. Their explanation for the exile also involved events in heaven. But it was very different. Yahweh had appointed seventy angels, archons, to rule the nations. However, Israel and Judah, the chosen people, were not under these angels but under their own divine ruler, the Christ. The elite of Judah had betrayed Israel. As a result, first Israel and then Judah had been destroyed by the nations. Which meant that Christ, heavenly king of the Jews, had been crucified by the angel archons in heaven.

However, the archons did not know all the secrets of heaven. They had been tricked. Christ was perfect and innocent of sin. He had made the ultimate sacrifice, and by this sacrifice had defeated the angels. He would be resurrected, and the archons and their human followers condemned. The death of Christ was the exile, and his resurrection the redemption. But this redemption was not the physical return of the Judean elite to Jerusalem which had already happened. The Israelite group rejected the second temple that was built by the returnees. Instead, they believed that the true exile had been expanded sevenfold in time. The resurrection and the real return were yet to come. When it happened, it would involve all of Christ’s people, bringing in the inhabitants of the nations as well as the Israelites and Jews.

The timing of this ultimate redemption was revealed through an apocalyptic calendar that I have called the Almanac. It set out the whole timeline of earth, from creation to destruction, in seventy “days” each of one generation. These seventy periods are organised into weeks of seven days, which are themselves ten “great days” of time. The Almanac is one of those features of the earliest Christianity which has been hiding in plain sight—it is recovered and recreated in this book for the first time. The Almanac was exquisitely designed according to the principles of symmetry and reversibility. It gave a new understanding of time, which resulted in the Christian sabbath becoming Saturday rather than Sunday. And it predicted that the resurrection of Christ would occur on the “third day”—meaning the third great day of the exile in Almanac time, a period of several hundred years. In perhaps the most spectacular timing mistake in history, the author of Mark misunderstood this as the literal third day, and so positioned the crucifixion under Pontius Pilate in Roman-occupied Judea.

This was not his only mistake. Remarkably, his account of the crucifixion day has also been derived from the Almanac. The book shows how the seventh Almanac great day, culminating in the destruction of Jerusalem and the temple has been translated into a day of twenty-four hours, culminating in Jesus’ crucifixion. This explains the strange structuring of the passion day in Mark, and how events are compressed in time.

The author of Mark has drawn upon a proto-crucifixion account relating to the last great day of the Jews. We can go as far as reading across from the days/generations making up that last great day, to the periods of Jesus’ last day in Mark. And this uncovers the secret at the heart of the crucifixion myth. The period of Gethsemane, in which Judas betrays Jesus to death, corresponds precisely to the Judas War. Judas Iscariot represents Judah as many have suspected. But we can be much more precise than that—he represents the Judah and Jerusalem of King Ahaz’s day. The book shows how appropriately he is named, and how just about everything we know about him can be traced back to the Judas War. This even includes Judas falling and bursting open in a field!

Nor is just Judas—detail after detail in the passion day comes from the Almanac. Others have noted how the account of the crucifixion seems to be linked to Second Zechariah. This is because Second Zechariah is all about the Judas War. And like Christianity, it sees events through Israelite eyes.

From David and Solomon to Enoch

The Judas War had a profound impact on Judaism. The earlier writings often took a pro-Israelite slant and had to be reworked by later Judean scribes. This includes one of the charter legends of Judaism and Christianity, the story of David, Bathsheba and Solomon. The Afterword of the book shows how this story started as an Israelite satire from the era of the Judas War. The original was a scandalous tale of betrayal, adultery, illegitimacy and murder aimed at the Judean royal family and the high priesthood. A Judean scribe reworked the story to refute the accusations, but he did it in such a way as allows us to work out what those accusations were. Ironically, it was the reworked version that was to have a lasting impact by predicting the eternal rule of the house of David.

Although the Christ myth reflects events that go back to the Judas War, it developed over a long period of several hundred years. Inevitably, it was influenced by the Judean scriptures, and it, in turn, had some influence on those scriptures. There was also great mutual interaction with the cult of Enoch, which was active in the same circles at the same time. This was radically to change the concept of Christ. He became the Son of Man and the Child of Seven Days. For Christ had not just one, but three separate identities.

The ongoing influence of the Judas War

The Judas War changed world history. It led to Christianity and sparked the development of the Hebrew Bible and Judaism. But it had another, less welcome, effect. Scholars have long puzzled over how early Christianity appears to be anti-Semitic. How can a Jewish movement be so anti-Jewish? The historical Jesus school has it usual “it just so happened” explanations. It just so happened that as the movement expanded among gentiles, they rejected the Jewish teachings and became rabidly anti-Jewish. This makes no sense. Religion is inherently conservative, and the gentile converts would have revered their Jewish teachers and their culture. The rejection of the Jews is telling us something much deeper about Christianity. It reflects the continued bitterness of the Judas War. The original proto-Christian group had justifiable anger against the “Judeans” whom they blamed for the destruction of Israel. In the myth, the Judeans had betrayed the Christ to death. Originally “Judean” meant someone of the tribe or kingdom of Judah. But by the first century, “Judean” had become synonymous with the ethnic group as a whole. When the gospels rail against the “Jews”, they are actually using the word “Judean”. When the Gospel of Mark reimagined the crucifixion as something that had happened in the first century, the Jewish betrayal of Christ became all too immediate. The Jews would pay a dreadful price down the ages for this confusion. Hopefully with greater understanding, we can lay the Judas War finally to rest.