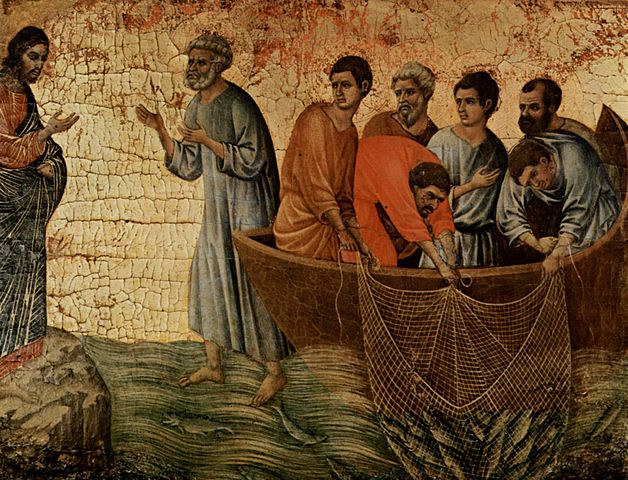 Duccio di Buoninsegna, The Miracle of the Catch of 153 Fish.

The last miracle in John occurs when the resurrected Jesus appears to seven of his disciples as they fish in the Sea of Tiberias (the Sea of Galilee). The fishermen are Simon Peter, Thomas called Didymus, Nathanael from Cana, the sons of Zebedee (James and John) and two other, unnamed disciples. They have been fishing all night but have had no luck. It is early morning when they spot a man they do not recognise (Jesus) on the shore:

Jesus said to them, “Children, do you have a fish?” They answered him, “No.” He said to them, “Cast the net to the right side of the boat, and you will find.” So they cast it, therefore, and were not able to haul it in, because of the quantity of fish. The disciple whom Jesus loved said to Peter, “It is the Lord!” When Simon Peter heard that it was the Lord, he put on his outer garment, for he was naked, and threw himself into the sea. The other disciples came in the boat, dragging the net full of fish, for they were not far from the land, about two hundred cubits. When they got out on land, they saw a charcoal fire in place, with a fish laid out on it, and bread. Jesus said to them, “Bring some of the fish that you have caught now.” So Simon Peter went aboard and hauled the net ashore, full of 153 large fish. And although there were so many, the net was not torn. (John 21:4-11)

Jesus invites them to breakfast and serves them bread and a fish. It is a nice story, which many people prefer to the other resurrection narratives: Jesus cooking a simple meal of bread and fish for his disciples on the shore of Lake Galilee. It raises many questions: not least why was Peter fishing naked? And why does he put his cloak on to dive into the water? But we are concerned here with the fish. What is the significance of the 153 fish? The number is precise and must have some meaning.

There is another puzzle that might not be so obvious. The miracle appears to be straightforward. The disciples cannot find any fish until Jesus tells them to put the net to the right-hand side. They make a huge catch, haul it in, and Jesus cooks some of the fish, giving them to the disciples with bread. But there is a problem; Jesus is already cooking a fish before the disciples make their catch. Most translations imply that he is cooking a number of fish, but the word opsarion (fish) is in the singular here. So why is Jesus cooking a single fish? And where did he get that fish from?

To search for the answers, we will look at three texts outside John which are linked to the fishing miracle.

Luke’s story of the miraculous catch

In Luke 5:1-11 there is another version of the miraculous catch. But the author of Luke sets the story at the very beginning of Jesus’ ministry. Jesus is recruiting his first disciples when he sees two boats on the side of the lake with fishermen washing their nets. He boards the boat belonging to Simon, which then takes him a little way out to preach to the people on the shore. Afterwards, Jesus tells Simon to put down the nets. Simon protests that they have not caught anything all night, but lets the nets down anyway. They catch such a large number of fish that the nets begin to tear, and the other boat comes out to help them take the miraculous catch to the shore.

There are enough points of close similarity to be sure that the Luke story is related to the John story. But there are also some remarkable differences:

John was written later than Luke, so there are two possibilities. Either the author of John has based his account on the Luke story, or both are using an earlier source. The two authors place the story in a completely different context and time. This is evidence that John is not copying Luke, but has independent access to the original story. The John version is probably the more reliable of the two. The imaginative author of Luke likes to change sources quite blatantly. And in Luke, the miraculous catch is used to add colour and drama to the main story from Mark about the recruitment of the first fishermen disciples. Details such as the 153 fish may have been dropped from Luke because they distracted from this main story.

The miracle of the loaves and fishes

The second link is with the miracle of the loaves and fishes in Mark. The two have some obvious similarities:

There is one other detail that is common to both miracles, and that is the number 200. In the loaves and fish miracle, the disciples complain to Jesus that they would require 200 denarii to buy enough bread to feed the five thousand (Mark 6:37). In the John story, Simon Peter swims 200 cubits. The number 200 must have some significance – but what? We will deal with this little mystery in a subsequent post of its own.

The fisherman saying in Thomas

The last source for the John story is less obvious but the most important. This is the fisherman saying in the Gospel of Thomas:

And he said: “Man [or woman] is like a wise fisherman, who cast his net into the sea. He drew it up from the sea full of little fish. Among them the wise fisherman found a good large fish. He cast out all of the little fish, down into the sea; he chose the large fish without trouble. He that has ears to hear, let him hear.” (Thomas 8; TC 1.7)

The fisherman’s net is full of fish, as in the John and Luke stories. But this time only one fish is large and worth keeping. The fisherman returns the small fish to the sea.

What is the meaning? Originally, the large fish would have represented the kingdom of heaven, and the little fish the many distractions of the world. A person should be like a wise fisherman, taking the one large fish and throwing the many smaller fish back into the sea. The unwise will attempt to feast on the little fish, but they do not nourish. The disciple should choose the kingdom and cast worldly distractions away.

The person who put Thomas into its final form uses the saying playfully, building a mathematical conundrum for his own purpose. He changes the meaning so that Jesus is now the wise fisherman. Jesus has taken the one big fish and left the other fish in the sea. This explains why, in the John story, Jesus already has a single fish which he is cooking. The disciples are less wise, putting their net into the sea to catch the fish which Jesus has left behind.

The size of the fish has changed between the Thomas saying and the John story. The many fish are “small” in Thomas but the single fish is “large”; all 153 fish are “large” in John. The same Greek word for “large” is used in both. This change is necessary for the literal story—a catch of 153 small fish would be an annoyance, not a miracle.

The Thomas saying gives us a vital clue: the miracle is not just about the 153 fish. We are supposed to compare two things:

The 153 fishes and the Thomas Code

So what do the 153 fish represent? The miracle is the last in John and forms a pair with the first miracle, the water into wine. Most likely, they both belonged together in the source, which would explain their chiastic placement within John. The story of the wine is about the division of the Gospel of Thomas into the eighteens. This is true also of the story of the 153 fish.

There are two different methods for calculating 153, one of which has been known for 1,600 years. But first, we will look at the other method which uses the Thomas Code groups.

The wise fisherman takes eighteen as the base for the Gospel of Thomas. The other groups are left in the sea, but are fished up by the disciples—so they are used also. We can list out the groups in order (we exclude groups of 1 because no one in the ancient world would have regarded a single saying as a group): 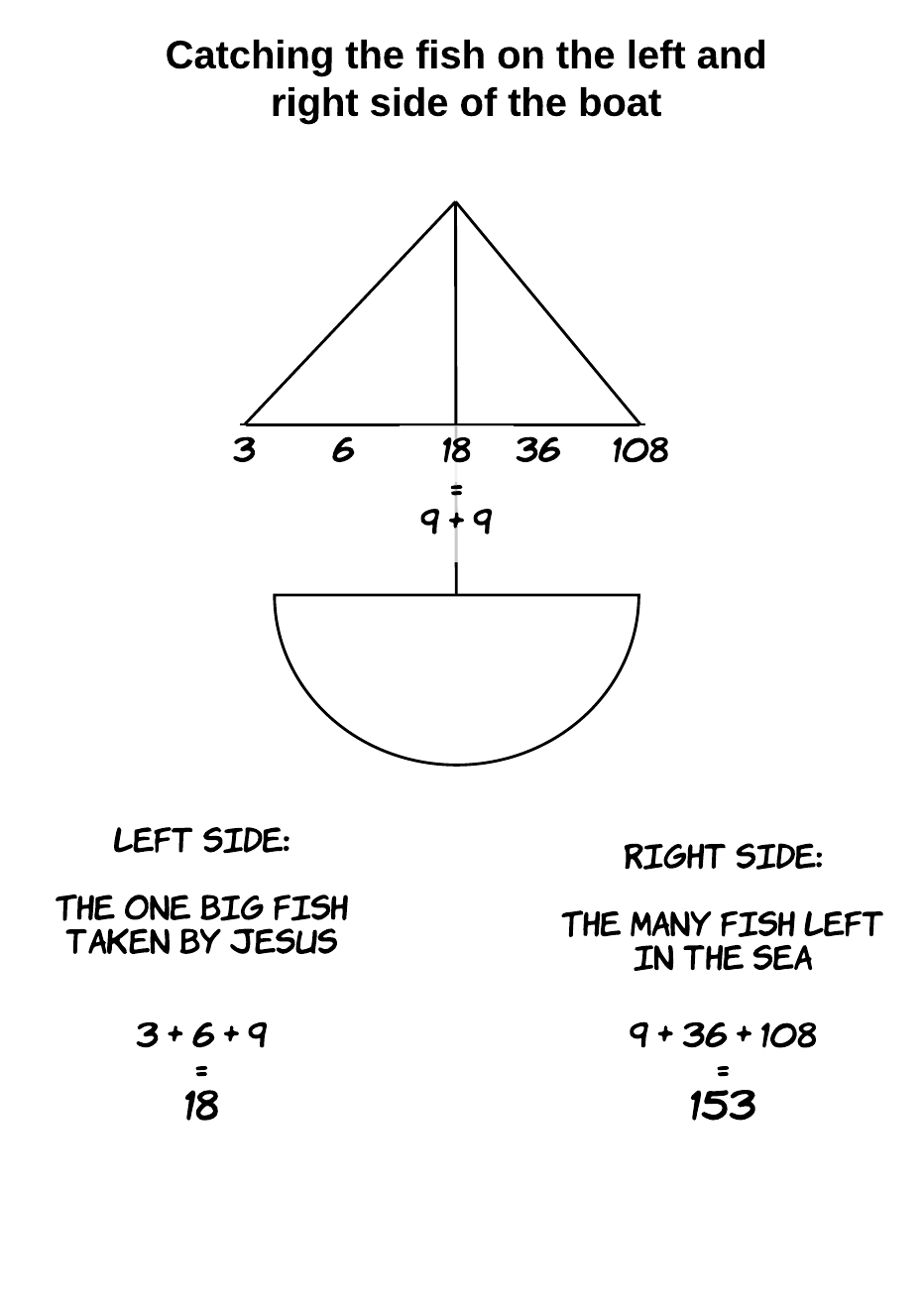 There is a different way of doing the calculation. Once again the big fish is 18, but this time the other smaller fish represent all the numbers lower than 18. So:

The fact that 153 equals the sum of all the numbers up to 17 has been known since St Augustine (354-430 AD). However, this left the question: why 17? Augustine offered an explanation – 17 stood for the ten commandments plus the seven gifts of the spirit. This is so obviously contrived that it has never found much support.

We should note that 17 is a prime number and equals the sum of the first four primes:

These four primes all play vital roles in the Thomas Code and the miracle stories:

But the most important number here is not 17 but 18, signifying the one fish not included in the 153 – the large fish which Jesus has already taken.

The author of Thomas discovered the two separate ways of calculating the number 153. He embedded this knowledge in the story of the large catch, which was then turned into a literal miracle by the author of John.

A sieve and a net

The fishermen’s net is prominent in the story of the miraculous catch in Luke and John.  I think there is a reason why a net is used to represent the groupings of the Thomas Code. The gospel is divided into threes, sixes, eighteens and thirty-sixes rather like a net dividing up the sayings.

The most efficient method for calculating prime numbers in the first century was a little like this. You would write down the numbers in order from two to as many as would fit on your sheet of papyrus. You would then cross out all the multiples of each prime in turn; first every second number after 2; then every third number after 3; then every fifth number after 5, and so on. When you have finished, the numbers not crossed out are the primes. The only limit of this method is the size of your papyrus sheet and your patience.

The method is called “the sieve of Eratosthenes” after the Greek polymath who discovered it. Eratosthenes lived in the third century BC and was the chief librarian at Alexandria. He is most famous for calculating the circumference of the earth to within a few percent of its true value. We only know about the sieve of Eratosthenes through the writings of another mathematician called Nicomachus who lived in the late first and early second centuries. His book “Introduction to Arithmetic” gives us a valuable insight into the approach to mathematics at this time. Nicomachus was a mystical-mathematician just like the author of Thomas, but of the Greek Pythagorean school rather than a Christian.

Now, a sieve is very like a net; especially if made with leather cords as some large Roman sieves were. So Eratosthenes’ sieve may have sparked the idea of using a fisherman’s net in the riddle story.

Recall that Luke’s version of the miracle relates to Mark’s story of the recruitment of the first disciples. Nets are very prominent in Mark 1:16-19 – the first time Jesus sees Simon he is casting a net into the sea. So this story in Mark may be derived ultimately from the same playful mathematical riddle set by the author of Thomas. If so, then the riddle is the likely source of the erroneous notion that the first disciples were fishermen.

The Mystery of Peter's Cloak