The Feeding of the Five Thousand 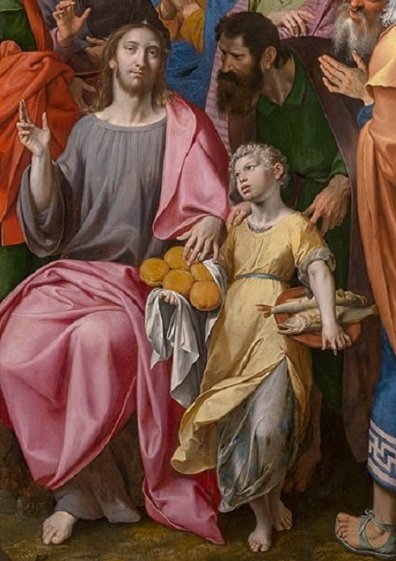 It is all a matter of multiplication—starting with 5 and 2. (Detail from Ambrosius Francken the Elder, Multiplication of the Loaves and Fish.)

This is the story of the feeding of the five thousand in Mark:

When he went ashore he saw a great crowd, and he had compassion on them, because they were like sheep without a shepherd. And he began to teach them many things. And when it grew late, his disciples came to him and said, “This is a desolate place, and the hour is now late. Send them away to go into the surrounding countryside and villages and buy themselves something to eat.” But he answered them, “You give them something to eat.” And they said to him, “Shall we go and buy two hundred denarii worth of bread and give it to them to eat?” And he said to them, “How many loaves do you have? Go and see.” And when they had found out, they said, “Five, and two fish.” Then he commanded them all to sit down in groups on the green grass. So they sat down in groups, by hundreds and by fifties. And taking the five loaves and the two fish, he looked up to heaven and said a blessing and broke the loaves and gave them to the disciples to set before the people. And he divided the two fish among them all. And they all ate and were satisfied. And they took up twelve baskets full of broken pieces and of the fish. And those who ate the loaves were five thousand men. Immediately he made his disciples get into the boat and go before him to the other side, to Bethsaida, while he dismissed the crowd. (Mark 6:34-45 ESV)

There is one clue in this story which, having worked on the Thomas Code structure, immediately resonated with me:

What does it mean that they are grouped “by hundreds and by fifties”? Are we to imagine that there are some groups of fifty and some of hundred? This would be an odd way of organising people. The grouping of the crowd seems a quite unnecessary detail in the story. But the Thomas Code structure made it beautifully clear. The 5,000 are organized into hundreds and fifties as two levels of a hierarchy.

The people are to be grouped into fifties and then two fifties combined to give the hundreds. This is an exact parallel to the organization of the Gospel of Thomas. Following the Thomas Code method, we can write 5,000 like this:

We can then apply each factor in turn, just like the organization of the sayings in Thomas:

We could also reverse the process in the same way as the Thomas Code and divide up 5,000 by the factors in turn.

This is no random sequence – it is closely connected to the Thomas Code. Like the Thomas Code we have two prime factors which alternate. And like the Thomas Code, if we add any pair of successive factors together, we get the next highest prime number which equals the total number of factors—in this case 7.

The Thomas Code family of sequences

The Thomas Code belongs to a family of related sequences. These sequences share some of the most important properties of the Thomas Code; (i) they involve two prime factors and (ii) if we add any two successive factors we get another prime which equals the total number of factors. It is easy to show that one of the two prime factors must always be 2 and that there is a sequence in the family for every pair of primes whose difference is 2. There are many such pairs of primes, for example:

These twin pairs are common at the start of the prime numbers but become rarer as we go to larger and larger primes. Are there an infinite number of such pairs? This is the famous “Twin Primes Conjecture” which is easy to state but fiendishly difficult to prove. Modern mathematicians are getting close to a proof, but they are still not quite there. [1]

For each pair of primes, there is a sequence in the Thomas Code family. [2] The following shows the first few sequences:

We could go further, but as you can see how the sequences quickly get very large. The next one, involving 19 factors, will multiply out to 1,032,188,877,029,890. Such high numbers are not going to be of interest to the mystical-mathematician who invented the Thomas Code. Only the first two sequences are factorizations of a number small enough to be attractive. The first of these, involving 5 factors, is the Thomas Code. The second sequence, with 7 factors, is encoded in the miracle of the feeding of the five thousand.

The seven-factor sequence is the next closest sequence to the Thomas Code. This sequence multiplies out the prime factors of 2 and 5 to give 5,000. In the miracle story, 5 loaves and 2 fishes are multiplied to feed 5,000 people. The miracle is actually about the sequence, with the loaves and fishes standing for the two prime factors. Given these clues in the story, the links to the Thomas Code formula cannot be chance.

The above is the first part of a mathematical exercise which continues with the near-identical miracle of the feeding for the four thousand. The two parts come together in the summary that Jesus gives to his disciples in a boat. The analysis in the book covers both parts. The second half is a little more involved than the first, but every single feature of the two miracles falls out naturally; the seven and twelve baskets of scraps, the seven loaves of the second miracle, the yeast of Herod and the Pharisees and the second miracle’s crowd of 4,000. It all leads to an alternative form of the Thomas Code.

1. A breakthrough was made by Yitang Zhang who proved that there is an infinite number of pairs of primes whose difference is not more than 70 million. Mathematicians have subsequently been able to reduce this number to 4,680, but they need to get it down to 2 to prove the Twin Primes Conjecture.