The Mystery of Peter’s Cloak 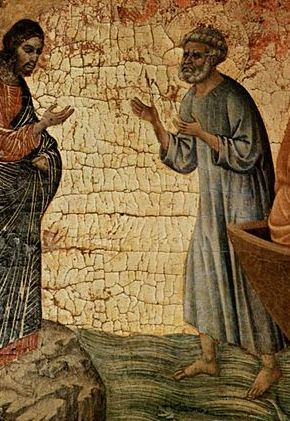 Crossing water wearing a cloak – no problem! (Detail from Duccio di Buoninsegna, The Miracle of the Catch of 153 Fish.)

Before Simon Peter dives into the lake to swim 200 cubits to reach Jesus, he puts on his cloak. This is very odd behaviour. A swimmer would naturally take off his clothes before diving into the water. Clothes quickly become waterlogged to weigh down a swimmer, giving a risk of drowning. Less dramatically, the valuable outer garment could be damaged or even lost if the swimmer were obliged to free himself from it. There must be something in the author of John’s source to account for this apparent absurdity.

We would expect the (probably unnamed) disciple to take off his cloak to swim. But the author of John would have had problems with this:

The author of John changes two details in the story. First, he makes the disciple into Simon Peter. This would not be the only time he turns an impetuous unnamed disciple into Peter; the disciple who cuts off the ear is unnamed in the first three gospels but becomes Simon Peter in John. Second, he makes Peter put on the cloak rather than take it off. So what would have been the significance of a disciple taking off his cloak and swimming 200 cubits naked?

As discussed in the book, this sub-sequence represents the twelve disciples.  Sub-sequences of the seven-factor sequence play a vital role in the full explanation of the miracles of the loaves and fishes.

The clue of the seven disciples suggests that we should start with this sequence of seven. The seven disciples are divided into five named and two others. This inclusion of a specific number of unnamed disciples is odd and must reflect something in the source. Most likely, the disciples were all unnamed in the original, not least because the person who probably wrote the mathematical riddles is one of the disciples in the boat—John, the son of Zebedee. I think it unlikely that he would have written himself into his own riddle. But the later author of the Gospel of John believes the story is an eyewitness account of a literal miracle. So he includes John, the author of his source, in the boat.

Assuming that the disciples were all initially unnamed, the riddle must have had something like “in the boat were five disciples and two other disciples”. The split indicates what we are to do with the seven factors—we must split it into five and two. The word translated as “cloak” is ependutés which means the outer garment. By removing the outer garment, we reveal the “naked” subsequence: 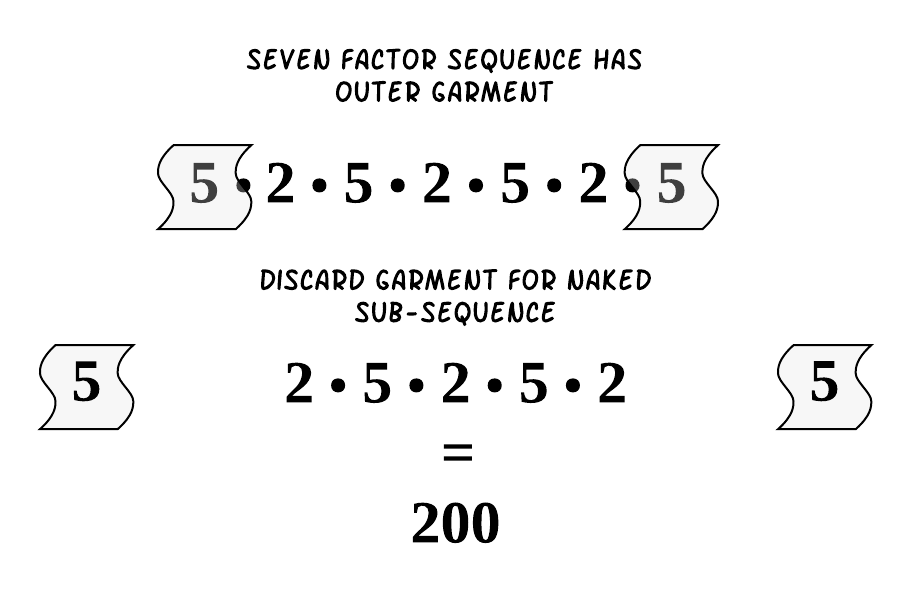 So the naked swimmer swims 200 cubits. The number 200 is also linked with the seven-factor sequence in the miracle of the feeding of the five thousand; the disciples complain to Jesus that they would require 200 denarii to buy enough bread.